The estimate of 815 million people enduring chronic food deprivation in 2016, compared to 775 million in 2014, is depressing in itself, but more important is the finding that the deprivation is even greater among people who live in regions affected by conflict and the extreme effects of climate change. In a confounding finding, though, the report says that child under-nutrition rates continue to drop, although one in four children is still affected by stunting.

These are averages and do not reflect the disparities among regions, within countries and between States. Yet, the impact of the economic downturn, many violent conflicts, fall in commodity export revenues, and failure of agriculture owing to drought and floods are all making food scarce and expensive for many. They represent a setback to all countries trying to meet the Sustainable Development Goal on ending hunger and achieving food security and improved nutrition.

What is more, the Centre recently said it had received only 3,888 complaints on the public distribution system (PDS) over a five-year period. All this shows that the Centre and State governments are woefully short on the commitment to end undernourishment.

According to NFHS 2015-16, every second tribal child suffers from growth restricting malnutrition due to chronic hunger. Such acute food insecurity in tribal households is due to a loss of their traditional dependence on forest livelihood and the State’s deepening agrarian crisis. Besides these, systemic issues and a weakening of public nutrition programmes have aggravated the problem.

For example, 20% of tribal families did not receive rations (public distribution system) in Vikramgad (in Palghar, Maharastra) as they did not have a card.

India’s efforts at improving access to food and good nutrition are led by the National Food Security Act.There are special nutritional schemes for women and children operated through the States. In spite of such interventions, 14.5% of the population suffers from undernourishment, going by the UN’s assessment for 2014-16. At the national level, 53% of women are anaemic, Health Ministry data show.

Further, nutrition interventions and tracking progress cannot be done without sufficient information and reliable, updated data, and the operationalisation of a national nutrition surveillance system. Thus, there exists the need to collect and maintain real-time data on various nutrition indicators using ICT and GIS.

How has this happened? 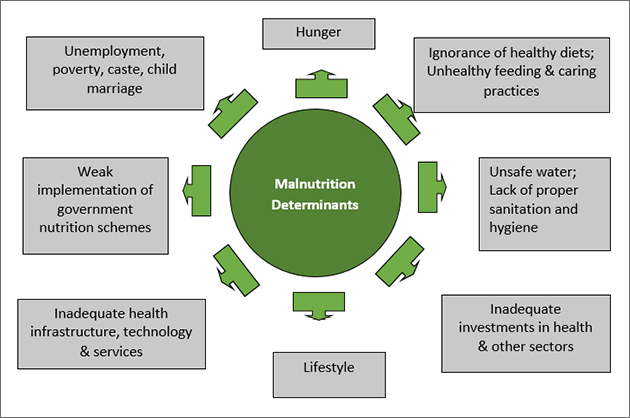 You Should Also Read